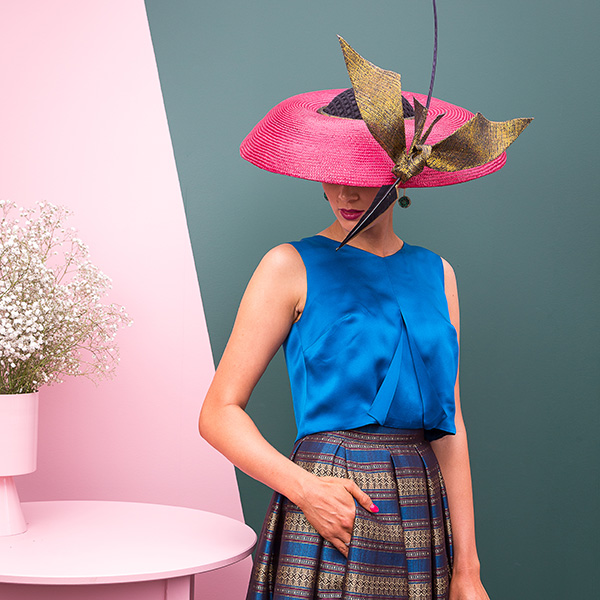 Master Milliner and Educator, Louise Macdonald shares the inspiring process to create this magnificent hat that reached the Finals of the Oaks Day Millinery Award 2017. There is always a fascinating story behind the hat.
Photo: Richard Shaw

All your hats have an imaginative title, what did you label this one?
The inspiration for my hat titles varies each year. Often they are related to holiday destinations. The Seychelles and European towns have helped names designs in 2006 and 2015. Another year, 2008, I named the hats after Melbourne Cup winners. In 2016, Uber drivers in New Orleans gave inspiration. Greek goddesses, celestial names... etc etc. The Oaks Day Millinery Award piece from 2017 appeared to late in the season for naming rights! So in 2018, I named her Amelia. I was channeling old world girls names that year!

What was the inspiration behind the design? 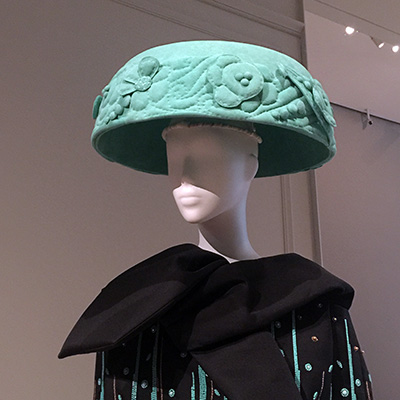 The Dior exhibition was on in Melbourne that year. There was a Green Hat with a downturned turned brim on a mannequin on a pedestal. I was curious to how it was sitting so high on the head, but also thinking that some interesting detail underneath the brim would work well when viewed from the vantage point of the floor, looking up as we were.

When working out what to make for The Oaks Day Award, I was reminded how the judges view the pieces on the catwalk, looking up at the models and hat. So decided to execute my musings from the Dior exhibition of some detail under the brim. The skirt and top offered to me by Julie Goodwin Couture, reminded me of the Diors “New Look”, so thought my own interpretation of the big lampshade brim would work.

I bought the outfit to the studio and just chose materials that I had at hand. The Maroon buntal mat I Chose, I had used as a demonstration sample in a workshop I had taught previously. As construction progressed, I discovered a few different materials that I swapped with my original selection. For example, I scrapped the turquoise feathers and used black and gold I instead. The gold net I originally thought I’d use was replaced with a much stiffer bit of gold mesh I had tucked away in the cupboard for about 20 years. It was too tough to block... which is why I hadn’t used it, but was perfect for an inner boarder in the under brim.

I decided to put the trim... (it’s supposed to be a bird but some see a pterodactyl, ...which now pointed out is completely obvious!).. on the edge of the brim in order to step away from the ”vintage” look... I wanted it to look contemporary, but with classic expertise. Initial materials choice. | Trying to bend the trim into the right position. | I chose a maroon / raspberry thread to sew the cream brim down, as I could conceal the stitches in the cream straw, but could be seen on the outside maroon brim.

Which section took the longest to create, were there any challenges in creating such a wide brimmed hat?
The trim did take a long time, but the hat and under brim took longer! Millinery is about problem solving. Which bit to make first? How to conceal stitches, balance, weight, stability were all considerations in making the piece. The trim is quite heavy, how was it going to stay there without tipping the hat on the models head? The trim is wired for extra strength, how will I conceal the stitches under the brim that hold the wires from the trim in place?

It’s a very big brim, would it withstand the elements? I didn’t want it blowing off the models head. And above all, I wanted it to be easy and comfortable for the model to wear. I think their job is a hard one. Inevitably the weather is rotten, (too hot or too cold,) they have to stand around in high heels all day, and look like they are having a wonderful time! The last thing they need is a hat that’s giving them a headache to not staying on their head properly. Comfort is key. So I made the head fitting to my models measurements and had a fitting of course. There are wire struts coming out either side of the crown, embarrassing the head, that help the hat stay secure, along with some elastic. I also had a comb at the back that slid down into the models bun. So the thing was secure and comfortable.

Once I’d attached the wired maroon brim to the crown, then sewn the black and gold sinamay binging to the underside of the brims edge ( on the outer edge of the brim ) I then made the trim and attached it to the brim edge, with wires poking thought the brim , then sewn securely to the inside .... and hidden under the black and gold Sinamay binding. Then I had to work on the rest of the cream under brim, while the cumbersome trim was in place! You can see in the above photo, I positioned the hat upside down on a donut brim block, placed on a foot stool, in order to work on it without damaging the trim. Yes this has been how I spend my Melbourne Cup Days for the last 12 years! Sweating away in my studio, hoping it’s going to 1. Work. 2. Look any good! 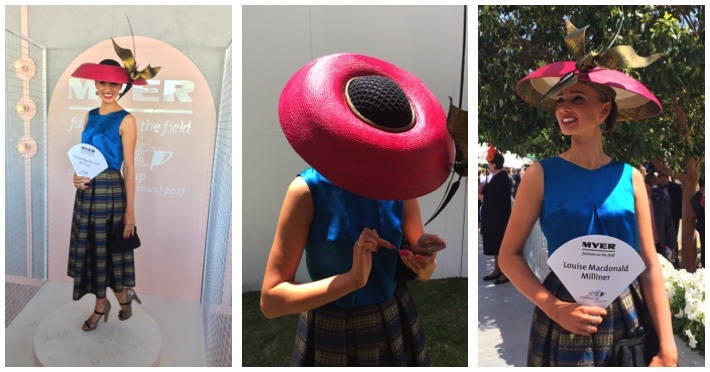 The crown is from Sinamay with a black cotton lace overlay.

You have mastered the versatility of Buntal straw why is this a favourite component for your headwear.
Yes, your’re right , I’m very keen on the buntal straw. Its down side is that it’s quite a coarse weave. But it has so many upsides, I think they cancel out this one flaw. I love the strength of the straw. Big brimmed hats are fragile, but the buntal straw is the exception for making a sturdy wide hat. It’s woven on the bias, so can move and block easily when creating a shape.

One of the materials that some of us have missed in millinery for the last 20 years, is esparterie. With it, you could create your own original 3 dimensional shapes by hand, using a bit of steam, the iron, some wire. Many of the costume hats I made when working as a costume milliner were created with esparterie. Esparterie became too expensive and disappeared off the market for many years. I have found that buntal mats have a similar properties to esparterie, and I have been able to make many of my own shapes, and make my own blocks using this material.

More recently there has been mats with really interesting decorative patterns woven into the straw, which I love.

As a finalist in the Oaks Day Millinery Award have you any advice for others who are considering entering such an competition?
Yes I do. Undoubtably you’ll be nervous and full of self doubt. Better get used to it and just get on with it, because we all feel that! Every year! Even after 10 or more years! But I never hear anyone saying after going In the competition, that they shouldn’t have bothered. There is always something to be learned from the experience. It’s a great way to learn. Every year I come away with something to try or correct... next time!

Take lots and lots of photos! You will be able to use them in your marketing.

Try and get a model who is confident and relaxed, and not phased by posing and strutting her/ his stuff!

Sort out the outfit early! It just takes away an added stress.

Think about how your piece will be viewed from a distance. I have seem some exquisite pieces on the stage that have not been acknowledged by the judges.... cos they can’t see that beautiful close up feather work, or beaded detail. Save those intricate details for competitions where the judges will be seeing your piece up close.

Although we would all love to win, winning is not the only benefit in the Oaks Day Award. Its challenging yourself, socialising with others in the industry on the day, and making something that YOU are proud of. The hat was too big to wear on the train, so we placed it into position on the platform at Flemington! You can see the lovely “ varnish” gloss on the straw here.

What did I most enjoy about creating this stunning hat?
Hmmm.... the challenge? Although stressful at the time of making, the final result after it all over is always good. Going out to the racecourse with a happy relaxed model saying she was really looking forward to the day? ( those words let me breath a sigh of relief and know that I could relax myself and enjoy the day! )