For Master Milliner, Margaret Gill an opportunity was given to diversify from Fashion Millinery to Theatrical Work. Read about the challenges and delight she experienced with this transition.

Almost 16 years ago you made the transition from Fashion Millinery to Theatrical Millinery. Milliners around the world dream of making such a change. What proved to be your biggest challenge?
I always felt I was more a theatrical milliner than a fashion milliner, I don’t feel that I follow/ed fashion trends. So it was more about finding my place in this part of our industry.

My first headwear show was back in 1986 working with Melbourne milliner Peter Jago on ‘Sugar Babies’. Peter was based in Tamarama in Sydney back then. I absolutely loved working on that production and I learnt a lot and knew that this was where I was meant to be.

I studied Theatrical Headwear at Hornsby TAFE in 1999, this is where I met and started my friendship with the delightful Jean Visser. I got a job working with Helen Kaminski as her pattern/ sample maker in 1999.

Kaminski were making the top hats for Moulin Rouge. Rosie Boylan who was the head of headwear on the film and was coming in one day so I asked a colleague to show her my CV. Rosie came in to meet me and we kept in touch. She gave me my first film job on ‘Australia’ and eventually ‘The Great Gatsby’. Rosie has become a dear friend and colleague of mine.

What areas of fashion millinery do you miss?
I probably miss working with felt. I always enjoyed steaming and blocking of the felts and I loved doing fine hand rolled brim edges. I do work with felt but often it’s as a base and it will be covered with an array of materials.

This recent production “Ugly Beauty,” featuring Taiwanese songwriter, singer and actress Jolin Tsai gave you the opportunity to create Costumes and Headwear with a touch of craziness. Briefly share the theme of the production.

I think all of us on this production were completely unaware of what we were about to get ourselves in to! When I was first asked to work on the show, I was told there’d be 12 or 13 hats… the reality was that there were more like 60. The 12 or 13 comment was about the number of designs but we were mainly making for the dancers and there were 16 of them.

It was a huge undertaking in a relatively short time. I was the head milliner and I had the pleasure of having Jean Marie Visser and Lauren Kenyon as my assistant milliners. We were a great team and we survived the stress and deadlines. We were all very proud of our finished work.

The theme was Ugly Beauty. I gather it was like an ugly duckling becoming a swan. There were themes of body image, bondage and the final look was a beauty pageant. Jolin had produced an album with this title so it was a tour promoting this album. If you get to see any of the footage you’ll be amazed at the design level of this production. The costumes, sets and lighting are like nothing you would have ever seen… the words chaotic and frenetic come to mind.

When working in a Theatrical Costume Production Studio are you directed by the Head of Costume or do you have some creative licence?
Certainly when you are asked to do a role such as this your viewpoint is always taken in to consideration but the designs are non-negotiable. This look would have taken months to be designed so your job is to deliver them as close to the designs as possible.

For these angular shaped headpieces what is your preferred foundation to give stability & strength?
Fosshape was definitely my friend here. I patterned the shapes in cardboard first for approval and then cut them in fosshape and sewed them together. They were all worked from a flat pattern. The majority were hand sewn so as not to compromise the shape. They were wired where possible by machine, but due to the unusual shapes and the lack of free arm machinery they were 90% sewn by hand. 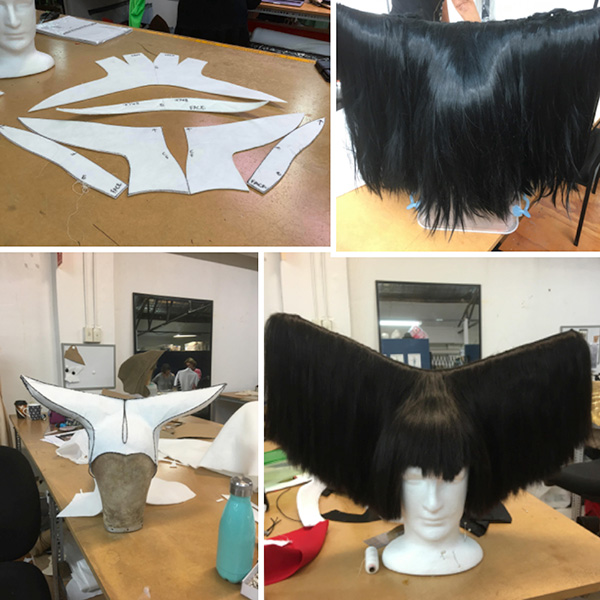 Do you engage other milliners to complete all these head pieces?
Initially it was only myself on the job and when the sheer scale of the production came to light I asked for Jean and Lauren to come on board.

Any tips how to secure headwear to stabilise as they perform and dance?
Some of the headwear needed to have a skullcap base due to the excessive movement the choreography required Some of these bases were made of bra foam and some of felt. The fosshape designs would be secured to these bases I personally like to use a wire headband that angles down just under the bulge of the skull at the back. This runs on an angle from the forehead to just above the ears and down under the bulge. Then there would be either crin and a chin strap or just crin depending on the physicality required of the performer. A challenge when making theatrical headwear is balance and trying to keep the weight of the headpiece to a wearable level for the performer.

Describe the Headpiece worn by Jolin Tsai.
Jolin’s headpiece was the one I was given the least time to make. I used fosshape again. I patterned a seed pod shape, there was a base shape that was wired all round and it had a flat centre to sit on the head. The top piece of the pod I shaped by using wire. I had a spine of fine sprung wire with cross wires hand curved to create the full shape and then married the two pieces together.

All the attachment workings were done on the under piece so that it could be attached to a skullcap felt base... so all the stitching and supports could be invisible... then the upper layer was attached. The main reason for doing it this way was because the cover was stretch PVC and there is no way to hide the stitching with this fabric. The outer layer was heavily covered in Swarovski crystals by another craftsperson. As there were no fittings I never saw it on Jolin in person so although I’m happy with how it looked it was not on the correct angle that I would have liked... a few centimetres out but perhaps only I would know that. 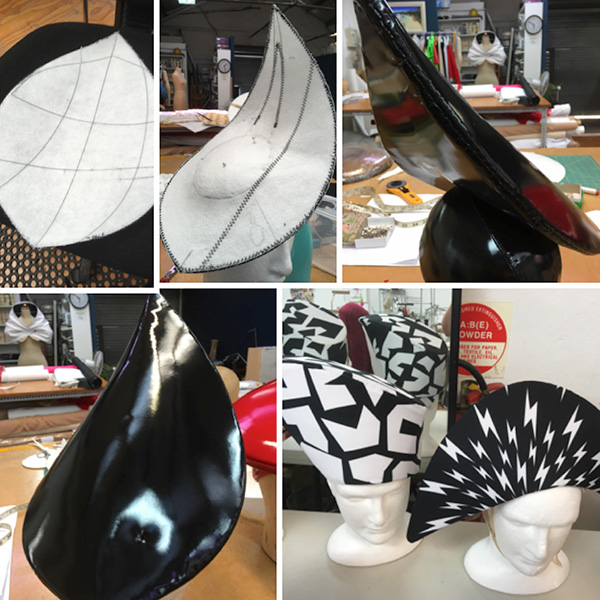 With COVID19 theatres have been closed. How have you survived this period of months of restrictions?
I was working in the costume department as an assistant cutter on a new film when we had to shutdown in late March. I was very lucky to receive the Jobkeeper payment. This was a great relief as during this period my beautiful Mum passed away. It allowed me time to grieve without the added financial worries.

I was commissioned to make some headwear for a children’s theatre company CDP Productions. They are doing a touring show of Alison Lester’s, ‘The Magic Beach’. I had to make two horses heads which I made out of fosshape and wire and organza... challenging but a lot of fun. Also I had a small commission for a magazine shoot.

Thankfully the film started up again this week. There is no headwear work for me on this film. I love the headwear work but it’s not always abundant so I am lucky that I am a costume cutter and maker as well, so there are more options for me.

Do you anticipate new productions going forward with restrictions in Sydney now lifting?
There are certainly many shows in pre production. There are ways to work around the producing of these with health and safety checks. Although that is challenging in itself, we have many guidelines on this film which are tricky as it is such a collaborative process. We have been advised that we will be having weekly testing for COVID as of this week.

I think the difficulty for productions is once they get in to a theatre and the seating arrangements for the theatre goers... basically under these restrictions you’re only able to have a quarter of your usual audience; and is that even viable?

I work on a few shows a year for the Ensemble Theatre ( Kirribilli ) as a costume coordinator. The theatre only holds about 220 people, under these restrictions I could only see them being able to hold around 50 / 60 people at the most. This company gets no government funding ( perhaps during this crisis they might be receiving some funds but I’m unsure of that ) so it’s very difficult for them.

What do you most love about working in theatre?
I love being part of a collaboration and seeing a designers images coming to life. Be willing to embrace new materials. I look on myself as a traditional milliner and was adverse to using new materials at first. I now love them and they definitely have a role in Theatre work.