Join Noeleen Kish on her millinery adventure to Royal Ascot!

Royal Ascot has been on my wish list for hat wearing events for such a long time and I was delighted to have the opportunity to attend ladies day this year. It just happened to be a relative's milestone birthday in London around the same time as Royal Ascot, making it a great excuse to pack my bags and depart from the sweltering heat of Hong Kong to London.

With not much time to prepare it was vital to decide on a design quickly. Usually I like to ponder during the creative process and I get swayed in many directions before I nail down the design and then execute it. My creations then usually take on a life of their own and evolve organically into something more than I envisioned.

In the spirit of Royal Ascot and it being such a historical, elegant, glamorous and not to forget a Royal race meeting, the organisers set out strict guidelines for the dress code. I decided a large hat rather than a headpiece was a must. Keeping it light and summery was very important for me as I was going to have to carry the hatbox on board the flight to London as there was no way I was going to check it in!!!

I decided to use one of my newer hat blocks purchased from Darryl Osborne Hat Blocks Australia. A saucer shape block with inbuilt crown and downward slope. I blocked the shape with Natural Sinamay. Two extra large handcrafted Thai silk petalled roses were added, one to the front and one to the back. Grey braid was used to add a sculptural minimal effect. The hat was finished off with a bumper around the brim edge, a modern take on the vintage style. The bumper came in handy when I was trying to get a glimpse of Her Majesty and get a photo at the same time!! Now to the outfit... the hat comes first for me and in this case the red rose was the starting point. 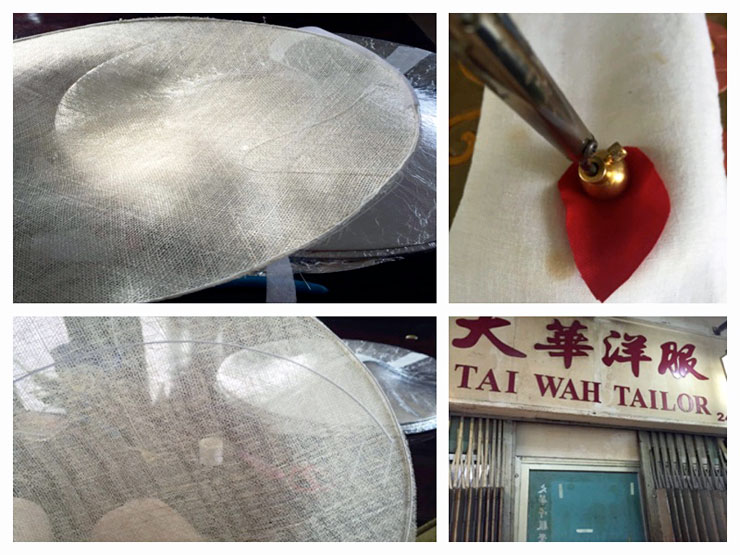 One of the great things about living in Hong Kong is you can get clothing made from old school tailors. I went to my old tailor on the Island and brought along red thai silk and a sketch of the dress I wanted him to create. It took him about one week to finish the asymmetrical one shoulder dress and with a few fittings in between the dress was ready. The red thai silk dress tied in beautifully with the flowers made from the same fabric.. I was good to go. The day before I departed various Noeleen Millinery hats were photographed at the Peninsula Hotel, a landmark in Hong Kong. I was delighted to have my Ascot hat photographed on a model before I headed to London. On the day I departed, It was touch and go whether I could get the large hat box through security and on the plane but it all worked out in the end. 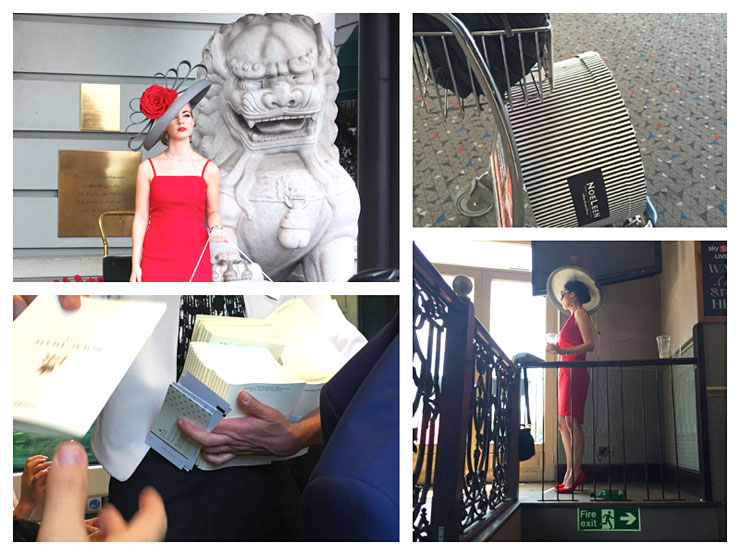 I had pre ordered grandstand tickets online for Ladies Day, the third day, held on the 18th of June. Also the classic picnic in a box for lunch and the train tickets to Ascot. The Ascot express departs Waterloo Train Station at 9.30am so I needed to start beautifying myself early, very early. There was a great atmosphere on the train and everyone was in good spirits checking out the fashion on display. I must say the men looked very dapper and it was really fantastic to see them so well dressed in their top hat and tails, this is one of the reasons Ascot is in a league of its own. The men really complemented their partners. Programmes were handed out on the train and we were even given some tips for winning horses from a fellow race goer. When we got off the train in Ascot, true to English form there was a quaint pub right outside, so we headed there for a few drinks before the 10 minute walk to Ascot race track. Many women brought flips flops with them and discarded them, then put on proper shoes before entering Ascot. In my case I endured the high heel walk. I have to admit I was a bit envious of the flip flop brigade. I had made sure to insert party feet into my shoes the night before, which actually worked quite well. 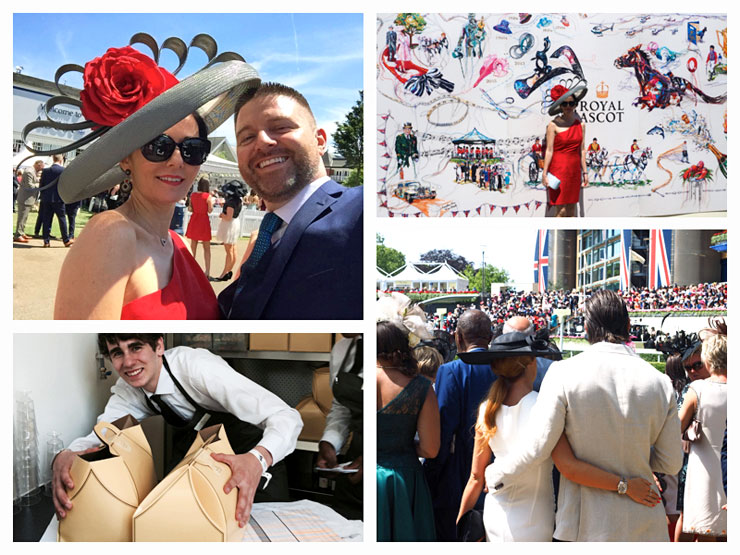 On arrival it took a while to find our bearings so we walked around snapping photos of race goers and taking it all in. Most of the large flamboyant hats are in the press so I tried to capture the regular punters that otherwise get overlooked over the massive show stopper and novelty hats. I had pre-ordered the classic picnic in a box and we went to the food area to pick them up where we carried on to a seated area to enjoy the four course meal and wine. It was delicious and well worth the money.

I placed a bet on race 4, the name of the horse was “Trip To Paris” a random pick. I could not believe my luck when I won 130 GBP, not too shabby, I was thrilled. Off we trotted to the Bollinger Champagne Bar to celebrate the win. 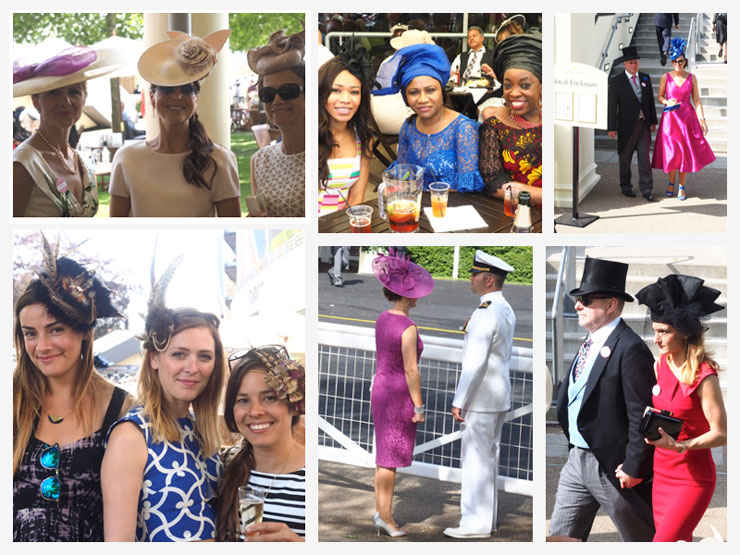 As far as Millinery and trends on the day, the full gamut was on display. I did notice quite a few women wearing trouser suits or all-in-one play suits and mens top hats adorned with flowers. Jinsin headpieces always pack a punch and stand out in the crowd always getting a second glance from onlookers. From distressed crinoline to pill boxes to disc hats to elegant cocktail hats to colorful feathered creations, funky headwear, bohemian chic headpieces, traditional and modern straw, fabric and silk hats. Not to forget Silk Abaca. I even saw a few felt hats. It was colorful, elegant, grand and dignified.

It makes me very proud to be part of the millinery culture, seeing all the millinery creations and knowing the hard work and dedication that went into them. Royal Ascot was a sight to behold. It leads me to believe even more so now, that hats are back in a big way and it is the milliners from around the world that are keeping this art alive and kicking. Every woman has her own style so do the individual milliners. Hats are very personal to the people who make them and the people who wear them. 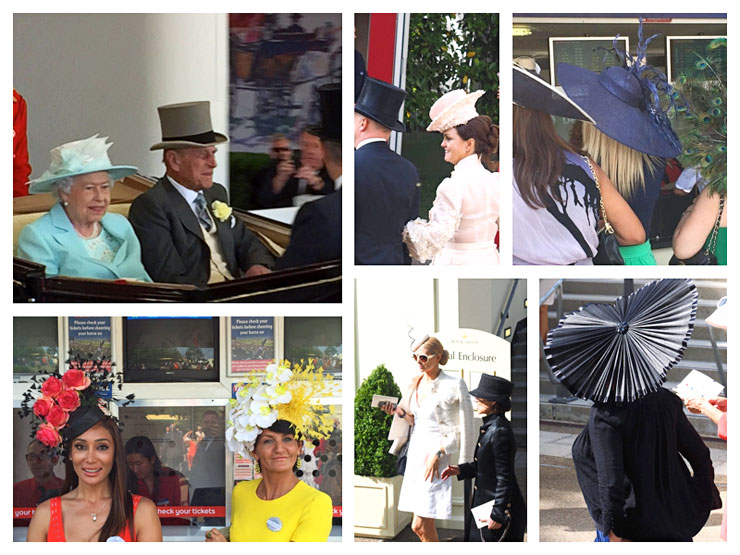 Another major highlight was getting so close when the queen went by in her horse drawn carriage. I never believed it was possible to get that near to Her Majesty and the photos turned out well considering the crowd were jockeying for space. There was so many people in my hatisphere at that particular time, but it was a once in a lifetime experience that will be not be forgotten in a hurry.