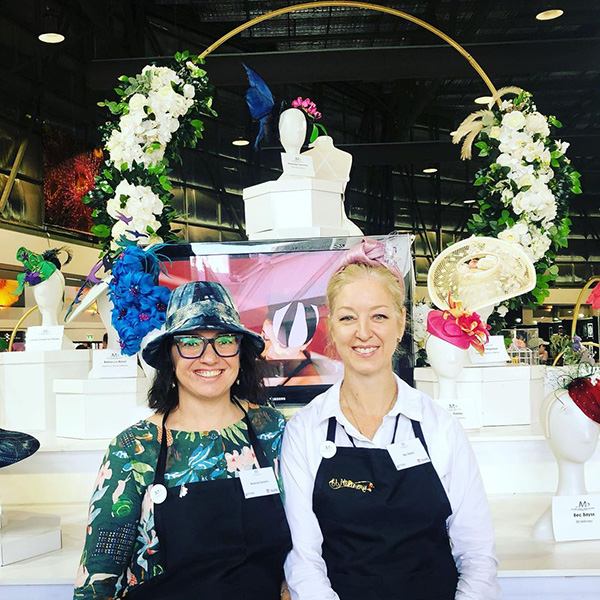 An amazing team of milliners put their heads together to revitalise interest in millinery at this years Royal Easter Show in Sydney. The response of this creative and collaborative event proved to be positive and uplifting to milliners involved as well as visitors, which included the Premier of the NSW Government who was enthralled by the professional display. Bec Bayss shares how it all came together.

After beginning my millinery journey in Sydney a few years back, I soon became aware that most millinery events and learning opportunities were taking place in Melbourne. I was seeing lots of fun events taking place with a real sense of community while back in Sydney we were struggling to make numbers for workshops and TAFE classes. I decided something needed to be done before we lost those opportunities all together. If I wasn’t going to do it, then who? I set myself the following long-term goals:  to raise the profile of millinery in Sydney, increase the number of enrolments in workshops & TAFE, increase the number of students who take up membership with the Millinery Association of Australia (MAA) and increase opportunities for milliners in Sydney.

I began working with the Royal Agricultural Society of New South Wales Arts & Crafts Committee in 2019 to revamp the millinery competition at the Sydney Royal Easter Show and make it more attractive to entrants.  By sourcing new supporters, establishing new classes, appointing a milliner to judge the competition and promoting the competition via social media I was able to increase entry numbers dramatically.  One of the main points of focus was the student class.  Unfortunately, Covid was to intervene, and the 2020 Show was cancelled.

Late 2020 the Australian Government granted permission for the 2021 Show to go ahead from April 1st – 12th.  The millinery competition was back and had gone from 9 entries to 75! There were four classes: Spring, Winter, Themed Wearable – Avant Garde and Student Millinery. 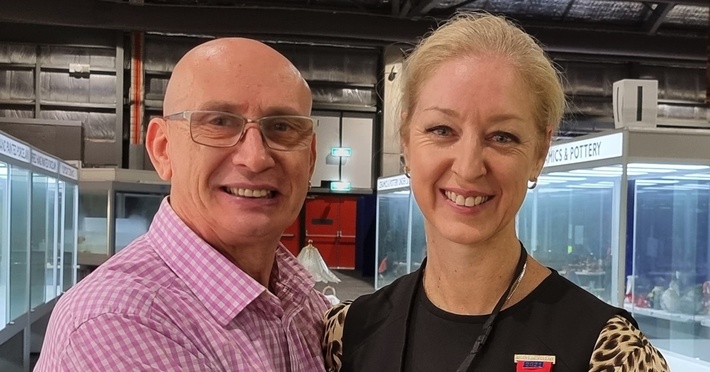 Sydney based Master Milliner Neil Grigg was chosen to judge the competition. Neil first trained in theatrical millinery with the late Betty Viazim and has been making hats for over 40 years. He has created hats for Crown Princess Mary of Denmark, celebrities, brides, race goers and fashions on the field. Throughout Australia, Neil judges fashion competitions, regularly teaches millinery master classes and appears on television. Neil is a fellow member of the MAA.

I was tasked with being Neil’s Steward for competition judging day. What a great selection of fabulous millinery across all four classes and what fun it was to try then all on. The winners were – Spring: Irene Moore, Winter: Catherine Kelly, Themed Wearable (Avant Garde): Rachel Cherry and Student: Carolyn Kelly. Meanwhile, in February 2021 I was approached by the RASNSW to ask if the MAA would like to have a feature display in the Arts & Crafts pavilion, separate to the display of competition pieces, for the duration of the show. To say I was excited was an understatement. There are normally over 900,000 visitorsto the show each year and it’s the seventh biggest event in the world. This was a huge opportunity to showcase millinery in Sydney and showcase the talent of MAA members. This would be a massive undertaking and I would need help. I had two months to make this happen!

I wanted the display to be a united event between the MAA, education provider -TAFE and the only Sydney based Millinery supplies business – Hatters Millinery Supplies. I approached Catherine Kelly of Hatters Millinery Supplies and Andrea Cainero who is the current NSW MAA committee representative and a head teacher at Fashion Design Studio TAFE NSW. Both were as enthusiastic as I was about this opportunity and with no time to waste, we set about planning the display.

A “garden party” theme was chosen and we reached out to milliners to take part in the display. As this was first and foremost an MAA event, participants would be required to become MAA members if they weren’t already. They would also need to volunteer some time working at the display, as we were required to have a minimum of two members at the display for each of the twelve days.  We wanted members to work together, to form relationships, to get to know each other face to face and build a sense of community.  As a result, we welcomed 18 new members, mostly students to the MAA. I think this speaks volumes about the limited number of opportunities there are for students to exhibit their work.

Our display area was approximately 11 x 4 metres with a waist high partition set back from the display which contained our demonstration space and provided protection for the hats so they could not be handled by the public.  To fit the garden party theme, we had a huge 2-metre-wide circular backdrop with a floral arrangement on it.  Six smaller circles with florals were dispersed throughout the display. Hats would be displayed on mannequin heads with hat boxes providing height over the different levels of the display. Everything from mannequin heads to name tags had to be sourced. We had a budget provided by the MAA, this meant that props etc which were purchased could be used for future MAA events.

While I was busy prop making, sourcing different components and compiling the roster, Catherine was designing posters, compiling a video of different milliners work which would play on a large screen at the centre of the display and receiving members hats. Andrea was co-ordinating new memberships, emailing members with requirements for the display and keeping volunteers up to date.  Definitely a team effort.

Two months passed by quickly with many meetings, messages, emails and calls between us to get things organised and before we knew it, we had our cars loaded up and were arriving at the pavilion to set up our display, one week before the start of the show.  It was daunting to think where to start and Andrea, Catherine and I spent a whole day setting up. We were exhausted but happy with what we had put together and excited for others to see it. In total we had 19 members rostered on to man the display over the twelve days. The task of volunteers was to introduce the public to the MAA, educate them about millinery, give them information about where they can go to learn millinery, answer questions and demonstrate millinery making. As this was a display of work, in line with the RASNSW commercial agreements, there was a strict no-sales policy. However, if someone was interested in a particular piece on display, we could provide the milliner’s details to be contacted after the show. As a thank you, each volunteer was given an apron with name & MAA badge on it to be worn at the display, they were also given a goodie bag from Hatters Millinery Supplies with a mix of millinery materials to be used for demonstrating.

It was so fantastic to see members meeting for the first time, coming together with a common interest and working together to promote millinery.  Everyone was full of enthusiasm. 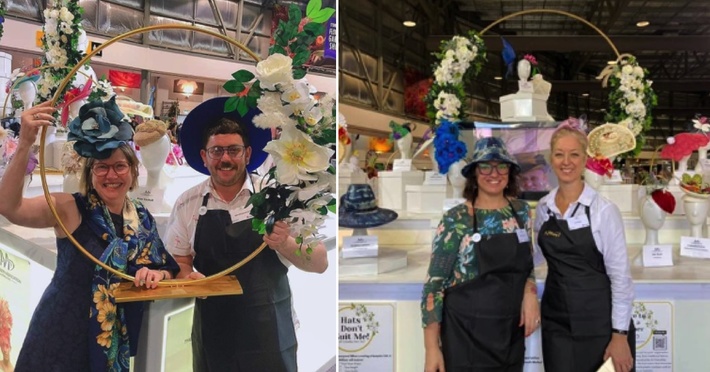 We had hundreds of visitors to the display each day. The NSW State Premier, Gladys Berejiklian made a surprise visit and was thrilled to hear we were promoting milliners from our state. Most people wanted to know what events besides Melbourne Cup we make hats for or had stories of their own grandmother’s being milliners. To see people’s faces when they approached the display and to hear their comments like “oh wow”, “oh my gosh, look at all the gorgeous hats”, “amazing” or “beautiful” made all the hard work worth it.

Chair of the RASNSW Arts and Crafts Committee Evan Hughes commented that this year’s display was without doubt the most beautiful, most stunning display that had been held in the Arts & Crafts pavilion. 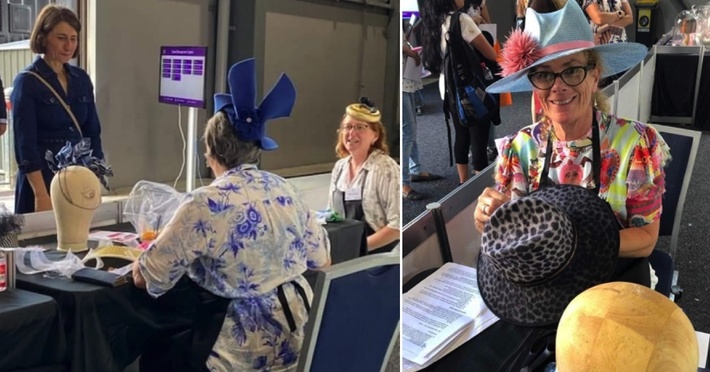 Visitors were a good mix of men, women and children. The demonstrations were very popular and drew a lot of people, all eager to see something amazing being created in front of them. We had lots of interest in learning millinery and how to get started which is very promising indeed!

Not only did we receive such positive feedback from visitors and all RASNSW Arts & Crafts Committee members, it was amazing to hear our own volunteers/members say how much fun they had, that they loved every minute of their time at the display and how great it was to meet other milliners/members and that they were looking forward to taking part in future events.

All in all, the feature display was hugely successful and the show itself had come to an end however, our work was not over yet. All great things that go up, must come down and the bump out team led by Catherine was just as important in making sure everything was packed up, returned, collected or stored. Thank-you to everyone who played a part in making this event such a huge success, especially to Catherine and Andrea for coming on this ride with me, I couldn’t have worked with two more passionate ladies.

2022 is the bicentenary of the Sydney Royal Easter Show which will run from April 8th- 19th.   The RASNSW Arts & Crafts Committee are keen to see millinery incorporated into other parts of the show so watch this space!