Relive the excitement of Royal Ascot 2022 through the eyes of Melbourne milliner Angela Menz with all the colour, the fashion and the amazing HATS !

Originally, I’d planned a trip to Royal Ascot in 2020… we all know how that turned out! As things were finally settling down and borders reopened, I decided quite last minute to make my fourth trip to Royal Ascot, one of the most famous horse racing events in the world. Ascot racecourse, located in Berkshire just outside London, was founded by Queen Anne in 1711 and has had the support and continuing patronage of all monarchs since. This helps explain why Royal Ascot is steeped in history and traditions. One of the most recognisable traditions is watching The Royal family arrive each raceday via a formal horse drawn carriage procession down the home straight while the National Anthem plays. 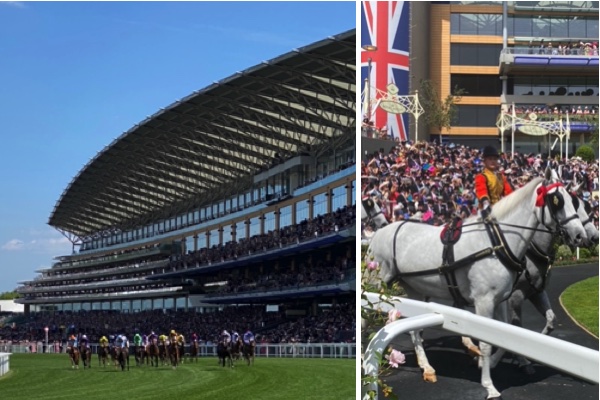 Royal Ascot has been a five-day event since 2002, when the Saturday raceday was first included as part of the royal meeting during Queen Elizabeth II, Golden Jubilee celebrations. It starts on a Tuesday, going through to Saturday. I attended the first four days.

As I was flying from Melbourne to London to attend, luggage space was a major concern as well as making sure my millinery would arrive safely. The only way I could guarantee this, was to carry my millinery onboard as hand luggage. This meant I had to be very careful about the size of my millinery, so although I wanted to wear big hats, the thought of trying to dash through airports with four big hats meant I had to reassess! I made all my outfits and my millinery, with each hat packed into one another inside a strong carboard hatbox. After many years of travelling with hats for the races, using a strong cardboard box as carry-on is the easiest way I’ve found to travel. (If you’re looking to buy your millinery, the department stores are well stocked too- see the Harrods Millinery department.) 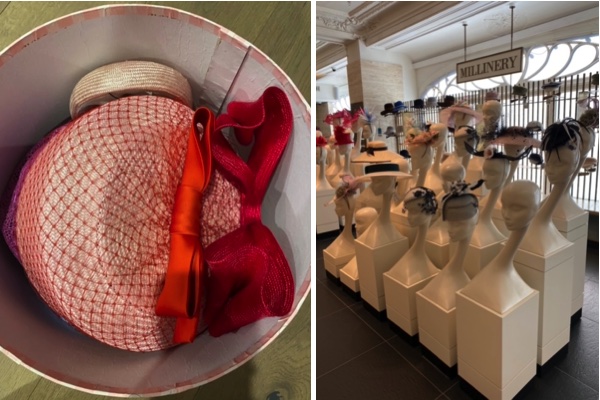 At Royal Ascot there are four different enclosures which allow you access to various parts of the course. They all have different dress codes which must be strictly adhered to. I was in The Royal Enclosure, which is the most exclusive and has the strictest dress code of all. To be able to access Royal Enclosure tickets, you must either be a Royal Ascot member, or a member’s guest. I was able to get my guest tickets as a Victorian Racing Club Member as they have reciprocal privileges. Gentleman must wear morning dress with a black or grey top hat and ladies must wear formal daywear including a hat. However, a headpiece which has a solid base of 4 inches (10cm) or more in diameter is acceptable as an alternative to a hat. Fascinators are not permitted. In addition to this, formal National dress and Military dress may be worn too. I wanted to wear different styles of outfits and millinery for the different days, so being mindful of the dress code, I deliberately picked different colours and styles to wear. For opening day I’d made a blue collard jacquard dress with silver threads and unicorns on the fabric. I had trouble being able to get a matching coloured parasisal to make my hat. To overcome this, I managed to find some nagoire feathers in a matching blue, ostrich boa and some pale blue vintage veiling. It may not be obvious in the photos, but my hat is a pale blue straw, entirely covered in feathers which solved my parasisal colour matching problem. 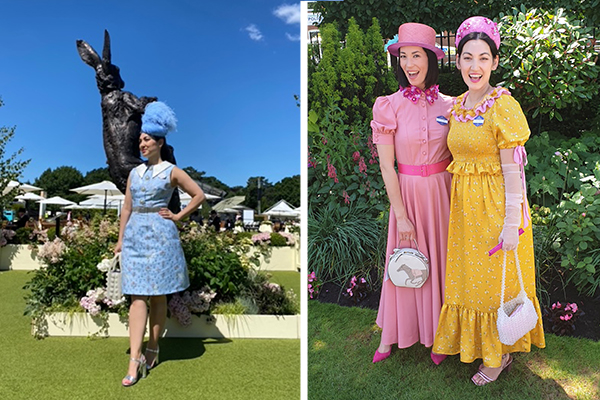 For day two, I went with a loose Bridgerton theme. My colour palette and style echoed those worn by Penelope Featherington. I hand dyed an open weave fancy straw hood and blocked a clean 60s shape worn to the back of the head. I didn’t want to overpower my outfit, so I sewed small, sequinned embellishments around the crown.

Day three is colloquially known as ladies’ day, so I wanted my outfit and millinery to reflect the feel of the day. I chose a classic feminine styled look with a twist. As an improvised hatblock I used a terracotta pot base from Bunnings and blocked a buntal straw over the top. I wasn’t originally planning to go on day four, only deciding to go the evening before, but I did have an outfit with me which was going to be worn at Chantilly (a racetrack outside Paris) for the Prix de Diane. Chantilly is less formal than Royal Ascot, so my dress and millinery reflect that. Thankfully my outfit still met the Royal Enclosure requirements. I had a blocked button base and contrasting straw bow which I stitched together the night before, so nothing would get crushed in transit. The perks of being a milliner! 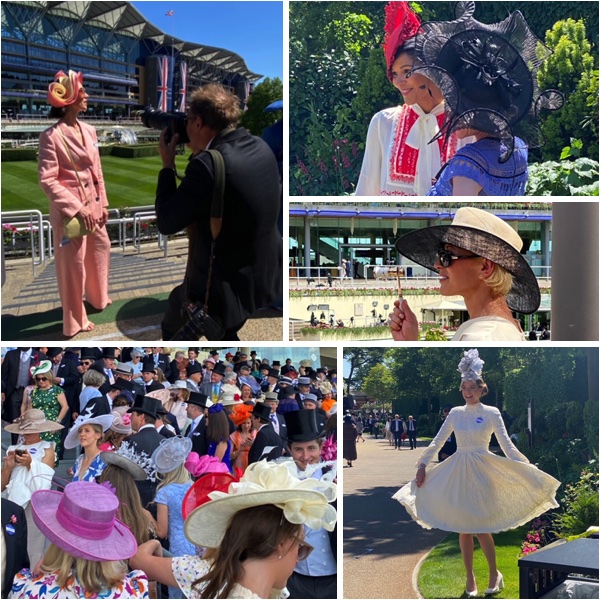 The people watching, fashion and millinery spotting is incredible at Royal Ascot and must be seen to be believed. When you enter through the main gate, the photographers are gathered ready to usher well dressed racegoers, celebrities and standout style to be snapped near the entry. Comparing the millinery at Royal Ascot to millinery in Australia, the dress code rules mean that women must wear much more substantial millinery than I’m used to seeing in Australia. Floating headpieces and minimalist headbands are nowhere to be seen and the styles vary enormously from very classic millinery through to outrageous pieces that gave me a sore neck just looking at them.

Sinamay is extremely popular as a millinery material and was spotted in various forms all over the course. When glancing across the crowds in the Royal Enclosure, large saucer and dish style millinery embellished with whisps of feathers, flowers and veiling seemed a very popular choice for millinery. 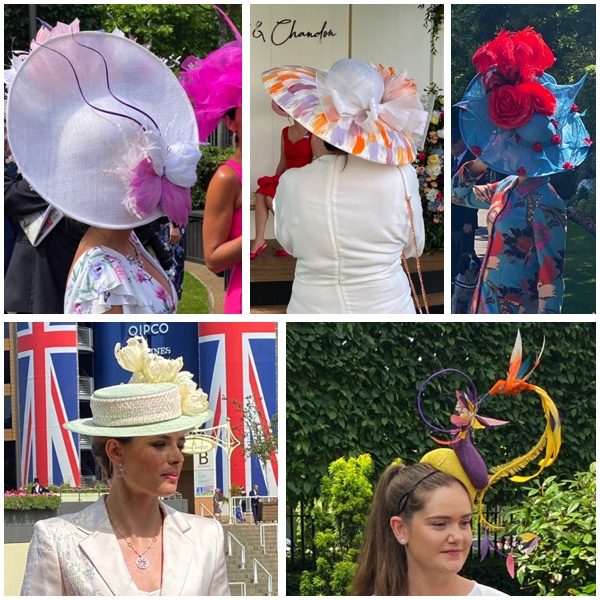 The Royal meeting really gets underway with the Royal Carriage Procession at 2pm each day. Lining up to see The Royals arrive is exciting and seeing what they wear is part of the fun of the day. Unfortunately, Queen Elizabeth II was unable to attend this year, so I was missed being able to bet on what coloured hat and outfit she would wear. My Royal Family spotting highlight was seeing Prince William and Kate. I heard they were about to arrive in their carriage and rushed as quickly as I could to catch a glimpse of them. Kate was wearing a very classic chic look in Alessandra Rich Polka dots and a matching Sally-Ann Provan hat. Royal Ascot is fabulous fun. For any lovers of fashion, millinery, horse racing and The Royal Family, it is simply a must to add it to your bucket list!