Few people can say that by the age of 21, they knew where they were going in life. For young Kenyan milliner Chloe Mitchell, it looks as though there isn't a doubt in her mind where she is going and how she is going to get there. This incredibly switched on young woman has been selected to showcase her millinery at a number of fabulous events though out Kenya. And.... if you think it couldn't get any better than that... She's been named one of the 25 most inspiring young women in her country.
Neil Thomas Photography | Interview Sophie Allport

How did you get into millinery?

My mothers aunt was a milliner about 100 years ago. As I did not know what I wanted to do with my life and not wanting to go to university I graduated from Rosslyn Academy in May of 2013 with the experience of designing and making dresses from up cycled materials (newspapers etc.) and took my mothers advice to go and do a course in millinery and see if it was something I enjoyed. I remember being a little girl in the car with my mum and she always said I should make hats like her aunt. I went over to the UK and studied with Rose Cory, milliner to the Queen Mother and teacher to many, now making hats for the Royals and then with Louise Pocock for a younger more vibrant style. I fell in love and became passionate about making hats.

Is there much competition in Kenya?

I am the only Kenyan based milliner with a wide scope that I know of at this moment in time so the competition is not as great as in other countries where you are competing with many other milliners. However here the competition is more with factory made hats brought in from China which are flooding the market. There is quite a demand for hats here, not just for weddings and special events but also for protection from the sun. The big struggle I have found with the demand here is that people want the hats but they are not too familiar about the quality or uniqueness that a bespoke/couture hat has and the price tag that comes with it. This lack of understanding causes one to think they can get a factory or Chinese made hat in a shop or on the side of the road and it will be the same quality as our handmade pieces. The demand is there but it is just trying to familiarize people with quality of the materials and workmanship as well as my hats being only one of its kind or style (bespoke).

What inspires you in your millinery/creative process?

I am inspired by a number of things one being the African culture and textiles that are available to me from fabrics (kikoy) to Kenyan or traditional Masaii beadwork. Another is the rise in Skin Cancers. This has caused me to start trying to design hats and make pieces that people would want to wear everyday or often that are unique, stylish, comfortable but also protects from the sun. But in general I would have to say that inspiration comes from places and things one would least expect.

Tell us about your experience exhibiting your pieces at the Fashion High Tea and Samantha’s Bridal Fair, how did you get involved with that?

My first runway show was at the Zen Garden Fashion High Tea 2014 which was quite a learning curve for me as I didn't quite know what to expect but the hats and headpieces seemed to make quite a good impact to the people who attended and to say, 'hello I am here'. And yes, hats can be this different and exciting! The experience at the High Tea was definitely amazing and that is where my millinery first took off. Since that event I have had many articles and mentions in newspapers, magazines and on TV about 'Drop of a Hat', even continuing seven months down the line and a lot of it started from the High Tea.

Showing at the Samantha's Bridal Fair was also a great experience. The headpieces that were being used up until this point I believe seemed mostly to be factory made pieces. When I set up my stall to exhibit, people seemed amazed at what was there. I did not know until 2 weeks before the fair that I was going to participate, it was therfore very last minute, but within those 2 weeks and very long days working into the night 'Drop of a Hat' managed to design and produce 16 pieces, all different. When I took the pieces to the changing room to put on models wearing bridal gowns who were to be walking the run way, they were fighting over who got to wear which piece. It was rather amusing! But they looked amazing wearing them and the pieces completed the look with the gowns. Our models here in Kenya look stunning wearing hats and head pieces. 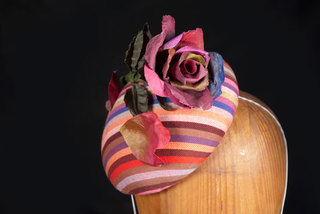 How have you benefitted from your lessons with Hat Academy?

Through Hat Academy I have learnt more skills and a have a much bigger concept of doing things neat and well as well as the new ideas including making realistic flowers. My training in UK was only for a few months and there is only so much you can take in in that time but with Elaine and Hat Academy I can log on and ask questions and see other ways of doing things. Elaine has been an amazing mentor to me, and she really gives me the confidence to feel like I can be someone in millinery, not just a milliner but a well known one.

What kind of occasions do people wear hats to in Kenya, is one more popular than the other?

From what I have observed I would say every day hats are the most popular worn at outdoor functions. However, hats for Race days and Weddings are popular. I have just completed a men's Top Hat with an under lining of Kikoy. It is so different and stylish and I hope will be something that the Kenyan Bridgroom and his party would feel great wearing. Hopefully those Kenyans marrying overseas may take my trendy Top Hats overseas with them.

Whats your favourite thing about millinery?

Theres so much I love about millinery, but the main thing is the uniqueness and the art. Every hat can be different and be made to stand out in its own way.

You have even managed to get a Celebrity to wear one of your hats! Tell us about that.

I also got a hat on Lupita a Kenyan Academy award winning actress when she was in Kenya, see the photo of her wearing it. She actually ended up being in Vogue. She now has two of my hats (a beaded fascinator) and we are waiting to see her wearing the second one.

You are so young! It is so inspiring to see someone with so much potential at such an early stage of their career, where do plan to take your millinery next?

In the near future I would like to take it to Europe as well as online.

Any advice or words of encouragement for those hoping to achieve great things like you.

If there is something you want to do in life, do it. If there is something you want in life, go for it. You can be, do or have anything you set your heart on, you just have to be willing to work hard enough and have enough passion to achieve it. If you try it once or twice and fail, then don't give up, keep working to wards it because even if you face disapointments and failures one day you will have a success and achievement and it will be that much more special, that is if you have the talent as well as the passion.