Behind The Hat: Nicole Cumberland 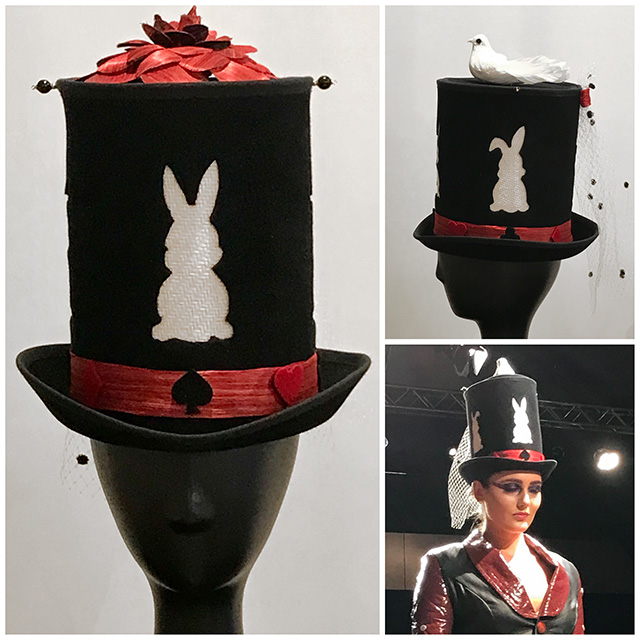 When 'Magic Happens' all is revealed. Congrats to Nicole Cumberland who received First Place in the recent Millinery Australia Student Design Awards 2022. Nicole has us us all entranced with her Top Hat Magicians creation “Hoodwink.” All is revealed with one touch of the tip of the crown! Her execution of this hat and finish inside and out certainly impressed the judges.

The reveal of the Magician top hat was your inspiration for “Hoodwink”, what do you find most fascinating about a magician’s show?
I do love a magic show as well as the world of magic and wizardry in shows like Harry Potter. I so enjoyed the second time I saw the stage show of Harry Potter and the Cursed Child as I knew when the magic was coming and I could try to work out how the stage craft was performed. I am always trying to decipher how the illusion is performed while at the same time enjoying the fantasy of trickery for what it is.

What was the base millinery material you chose to ensure it was sturdy enough to be used theatrically?
The hat was blocked from two velour felt cones with quite a bit of stiffener! I had to improvise to get the height I needed. As a current student at Kangan Institute in Melbourne I’m lucky to have the use of many blocks. I used two crown blocks on top of each other to achieve the height.

How did you engineer the movable top of the crown?
Firstly, I blocked the crown then used a blade to cut out the tip. I then blocked a second tip. These were wired together and covered with petersham at the edge. The top edge of the crown was also wired and covered in petersham. I then took 2 very long and strong hat pins placed beads on the ends. These were then secured through the sides of the hat and through the middle of the two felt tips. This allowed the tip to spin.

What elements, essential for a magician’s trick were in the reveal?
The Magician pulls a rabbit, a dove along with flowers out of their hat. The 4 white rabbits were made by cutting a silhouette out of the felt on each side the placing paper cloth behind to show the white rabbits. The white bird and the silk abaca flower were either side of the tip so can be rotated to reveal whichever one you like.

The inside of the top hat needed to be as neat on the inside as the outside, what was your fabric choice?
To ensure the inside was looking as good as the outside I made a silk dupion lining which was French seamed. The lining was shallow enough to still allow the tip to turn. The paper cloth rectangles to depict the white rabbits was bound in bias trim at the edges.

As milliners we like to think we are "pulling a rabbit out of a hat" when we create a new hat that is unique and innovative. The process of building this hat evoked that feeling for you?
The construction and thought process took me down many paths before my final design emerged. Those 2am inspirational thoughts got me there in the end. Initially I was going to make a satin cape which could be removed for the rabbit reveal. This was a fail, so I went for the veiling and silk abaca bow to represent the magicians clothing. The biggest challenge was to cut and bind the tip to ensure it was a firm enough fit to hold closed but not too tight to rotate when required. 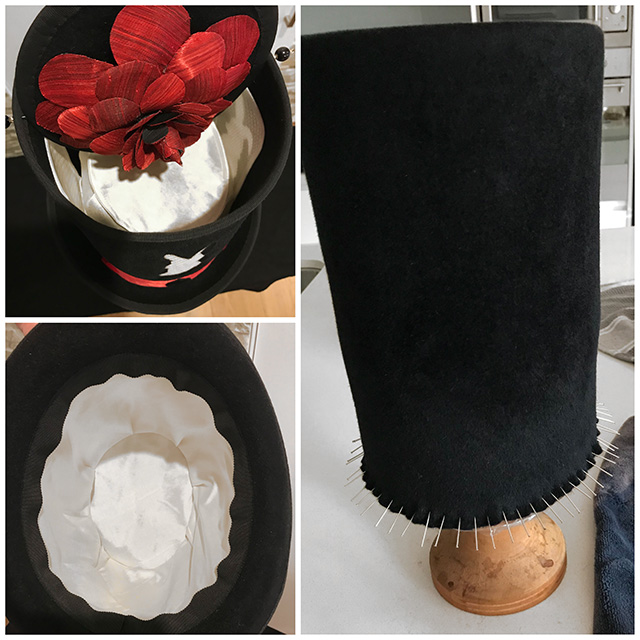 How did you ensure its wearability and stability on the head?
The top hat is quite high and has the weight of the felt so I tried to ensure all other elements were very light. Silk abaca, feathers, veiling and silk dupion added very little weight to the hat. I had a firm head fit and it stays on the head very well. It was just worn on the runway at the Fashion Devotion parade for the Kangan Fashion students at Melbourne Fashion week. 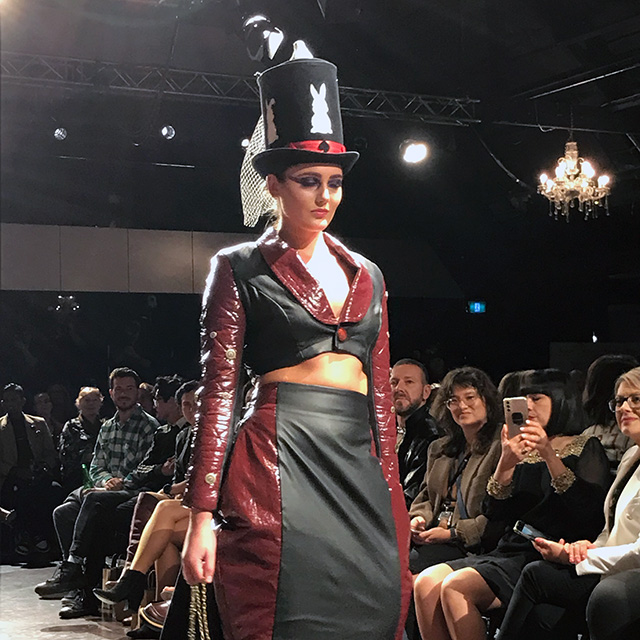 To millinery novices what is your best suggestion if they are considering entering next year's competition?
I would say take the theme and let your imagination run wild! It was a great experience for me. Entering was not something I had considered until my very enthusiastic Kangan classmates, who also entered, encouraged me along for the ride. I wasn’t entering to win I was entering for the experience. My passion is for theatrical pieces so this allowed me to follow my imagination and make a piece that evolved as my thought process evolved. It’s all about the journey the competition can take you on. Push your boundaries and you never know what you can achieve.

What a worthy winner .

can’t wait to see what she does next