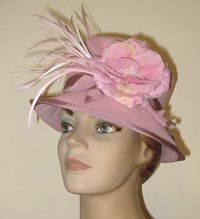 Felt Hat making is one of my Favourites but living in Sub Tropical Australia limits the demand. I love how steaming the felt allows it to become as pliable as children's Play dough.This is because Felt is a mass of wool and/or fur. It is not woven so it has no resistance to pull & push techniques. The Felt Hood in unblocked form has been pressed and manipulated in a centuries-old process using heat, water, and pressure to create the strongest, smoothest, most water-resistant natural fabric known.

Legends abound with regard to its origin. Some claim that St. Clement (the patron saint of felt hat makers) discovered felt when, as a wandering monk, he filled his sandals with flax fibers to protect his feet. The moisture and pressure from pounding feet compressed the fibers into crude, though comfortable felt. Others suggest that Native Americans or ancient Egyptians discovered felt by way of fur lined moccasins or camel hair falling into sandals.

In fact, none of these "firsts" is first as scraps of felt have survived since an era thousands of years ago, making it the oldest form on cloth. One theory postulates that felt was "discovered" many times and in many parts of the world because its popularity has risen when societies have become poor, cold, and agrarian. As each society became more urban and advanced, felt making subsided or disappeared. Enjoy Working with Felt in Lessons 19 & 20.